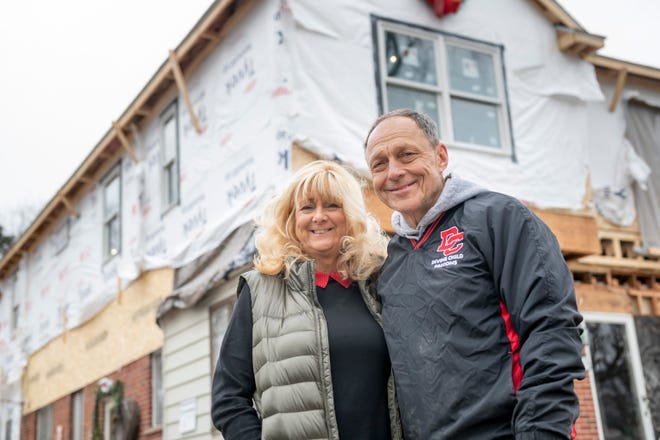 January 4, 2021
On Christmas Day, Dec. 25, 2020, our story was featured in The Detroit News. We are truly thankful for the outpouring of help and support.
View the photo gallery here.
View the full article on The Detroit News website.

Wencel, a 63-year-old retired drywall finisher and plasterer, has spent decades volunteering for his parish, his children’s schools, Meals on Wheels, and programs for seniors and veterans — but this holiday season, he’s on the receiving end of charity.

Dozens of volunteers are helping him and his wife, Debbie, add a second level to their former two-bedroom, one-floor ranch on Tulane Street in Dearborn Heights. The expansion will add room for the couple’s five young grandchildren, whom they’ve fostered since their 36-year-old daughter, Jaime Wencel, died of a heart attack on July 11, 2017.

Tom Wencel said that isn’t how he’d planned his retirement.

“I was a union construction worker, and (four years ago) when I was 59, I took an early pension,” he said. “It was less money than if I’d waited a few more years, but I told my wife, ‘We should be able to make it; we don’t have too many expenses, and I can do side jobs. We can hit the road in a mobile home and enjoy each other’s company.’

“Then, my daughter died, and suddenly we went from being a family of two to a family of seven.”

Jaime Wencel died of complications from Nina’s birth, Wencel said. The children’s father is not in the picture, he said.

“She was our youngest daughter,” Wencel said. “She was a great mother, and she was very popular — she had 500 people at her funeral.”

Wencel said he wasn’t prepared for the rigorous adoption process.

“We thought since we were their grandparents, they could just come live with us and we could adopt them,” Wencel said. “But, my gosh, all the paperwork, and the tons of red tape. We finally got everything finalized, but then COVID hit, and everything stalled. It’s very frustrating.

“But we’re very religious people, and we’ve put our faith in God that despite the hardships, things will work out. My priest was talking to me about it, and he put his hand on my shoulder and said, ‘If it takes 10 years, will it have been worth the wait?’ He’s right — we can wait a little longer.”

Wencel said his faith is what prompted him and his wife to spend decades volunteering for functions at St. Sebastian Catholic Church in Dearborn Heights, where the family worshiped, and where their children and grandchildren attended classes before the parish school closed last year.

Dr. Daniel Farkas, a Troy functional medicine practitioner who was childhood friends with the Wencels’ son Thomas Jr., said the couple was known for helping out.

“They were involved in everything,” he said. “If one of the (school) teams needed a coach, Mr. Wencel would fill in, or they’d help build floats. Whose parents build floats at their house? Tommy’s did.

“That’s why it’s so nice to see people helping them now. They deserve it.”

The philanthropy started with a visit from a family friend, Mike Kearns, owner of Kearns Brothers roofing in Dearborn, shortly after the grandkids moved in.

“I was telling him how there’s no room here, and he said, ‘You need to build a second floor,'” Wencel recalled. “He said he could get an architect to draw up some plans.”

“Rob came out and did the plans,” Wencel said. “I spent more than 40 years in construction, and I know it costs thousands of dollars to have plans made. I was hoping I could put a couple hundred down and make payments.

Kearns said word began to spread around the builder community, and other contractors stepped forward to donate time and materials.

“Guys just came together,” he said. “Tom’s a spiritual guy. He’s let that guide him throughout all this, and wow, the things that have happened are amazing. We provided the roofing; others did the carpentry work, the cement work … it’s really special to see.”

The upstairs addition will have four bedrooms, giving the family plenty of additional space, Wencel said.

“When we started construction on Nov. 8, there were more than 100 volunteers working that day,” he said. “Divine Child school (where his grandchildren now attend) sent over 30 kids to help. There were so many people helping out — it looked like one of those shows you see on TV.”

Wencel said the generosity hasn’t been limited to fixing up the house, which still needs extensive work that includes installing plumbing and indoor walls.

“Not a week goes by when there’s not an Amazon box on our porch or a Walmart bag with baby formula or diapers in it,” he said. “Every time we need something, God takes care of it.

“Our fridge broke down, and the next day I got a call from a guy who sells appliances that have a dent or scratch. We only had a couple of hundred dollars to spend on a fridge, so we went to look at it, and it’s this big, stainless steel, $3,000 fridge, with double doors and an icemaker. It had a scratch on the side that was going to be against the wall anyway. We ended up getting it for free.”

Wencel said there appeared to be more divine intervention after someone suggested he start a nonprofit that would allow people to write off their donations.

“The guy who does my taxes (Mike Bawol of Allen Park-based Bawol Accounting & Tax Services) donated the paperwork so we could become a nonprofit,” he said. “We filed the paperwork and wrote a letter about our situation, and they said we had to have a name for it, so we called it ‘Jaime’s Kids.’

“Two weeks later, we got a call that said we were accepted. (Bawol) told me, ‘whoever reviewed your application, it must have touched their hearts, because it usually takes a lot longer than two weeks to get approved.

“I’ve got 100 stories like that,” Wencel said. “Sometimes, God makes us dig through a pile of trash to get what we need, and sometimes He leaves it on our doorstep. We’re only barely above water — but we’re above water. God has given us what we need.”

Debbie Wencel said when people started showing up to help, she was “in a state of shock almost. Every day it seems we get a card with money in it, or people stopping by to drop off food.

“I didn’t think we were doing anything all that special, but a lot of people said suddenly taking on 5 kids when you’re in your 60s isn’t easy,” she said. “It’s something we weren’t prepared for.”

Debbie Wencel said she’s been monitoring the children’s Zoom classes since they moved in.

“That’s been tough,” she said. “I graduated (high school) in 1976, so to get on these Zoom classes … even the math is different for the 2nd- and 3rd-graders than what they taught us. So that was a challenge.

“But you realize there are people who are in tougher situations than you are, so you get up, put a smile on your face, and do the best you can.”

The Wencels’ charity has a website to accept donations: https://jaimes5kids.com/.

In addition to the home renovation, the Wencels are using money raised through the nonprofit for food, clothing and other necessities, and to help with school tuition.

“These kids are such a blessing to us,” Tom Wencel said. “Especially this time of year; having young kids in the house again at Christmas is really lifting our spirits.”

Farkas, who has donated time and money to the Wencels, said: “There’s something extraordinary going on over there. (Tom Wencel) been a fixture in the community for years, helping everyone else, and to see it come back to him like this is really something.”

Kearns said the spirit of giving has been a welcome reprieve from what’s been a tough year.

“In the middle of a pandemic, when people think good things aren’t happening, they are still happening,” he said. “People are finding a way to pull together and help someone who really deserves it. This defines who we are.”

Tom Wencel said he’s overwhelmed by all the support.

“I get emotional when I think about it,” he said. “You turn on the news in the morning, and the first 10 stories are murder, a carjacking, a high-speed chase. You say, ‘My gosh, there’s no good in the world.’

“Well, I can testify to the opposite. There are a lot of good people out there. A lot of them.”

If you would like to help, the following is needed for completion:

✓ Financial Contributions – by check or PayPal

All proceeds will benefit the children and the housing project. We have started a non-profit, Jaime’s Kids, which is a 501c3 nonprofit organization. If you would like to support us you can contact us by calling or texting, Tom Wencel, at 313-598-5182 / tgwencel@gmail.com or donate to our Paypal account.

Jaime’s Kids is a 501c3 nonprofit organization. All donations are tax-deductible.

Please consider making a one time or recurring donation to Jaime's Kids to help with basic needs and activities.
Make a donation