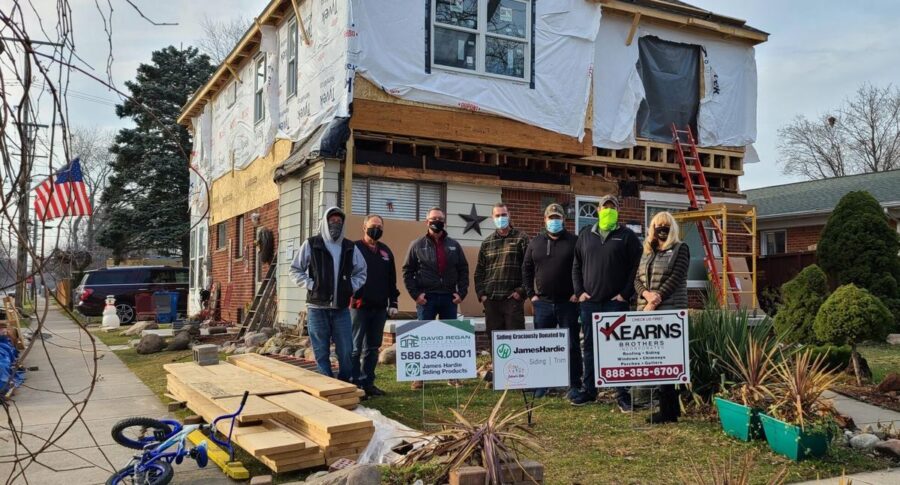 On December 14, 2020, our story was featured in the Press and Guide. We would like to especially thank  Sue Suchyta and Press and Guide for this great write up on our journey.  We are truly thankful for the outpouring of volunteers and donations our mission has received.

View the entire article on the Press and Guide’s website.

Volunteers and donors, including Patrick Bailey (left), of Pro Vision Construction of Allen Park, Mike Kearns (third from left), of Kearns Brothers, a roofing contractor in Dearborn, David Regan, of David Regan Exteriors of Detroit, and Michael Kratz and Aaron Wolf of James Hardie Building Products, have made possible the expansion of the home of Tom Wencel (second from left) and his wife Debbie (right), who are raising their five grandchildren, following the July 11, 2017 death of their daughter Jaime.

Volunteers and generous donors are helping create a holiday miracle for the Wencel family, who are adding a second story to their modest bungalow house to accommodate their five grandchildren.

Tom Wencel, 63, and his wife Debbie, 62, of Dearborn Heights, became foster parents for their five grandchildren following the July 11, 2017 fatal heart attack of their daughter Jaime, and hope to adopt the five children when the coronavirus restrictions reopen the court system to the process.

The Wencel house in Dearborn Heights is being expanded from a two-bedroom, one-floor bungalow to a two-story house, with four bedrooms in the upper level, built with the help of volunteers and donated materials, to help Tom and Debbie Wencel, who are raising their five grandchildren following the July 11, 2017, death of their daughter, Jaime. Sue Suchyta — For MediaNews Group

The community has rallied around the family, providing diapers, formula, children’s clothing, and many other necessities. As the family has grown, the need to expand their two-bedroom, one-story bungalow became increasingly evident, but it was beyond the couple’s budget.

Luckily, generous volunteers stepped in to help make the growing family’s dream a reality, and from architectural drawing to building materials, and with skilled volunteers supplying labor, people have stepped up to help put a four-bedroom second story addition onto the house.

Tom Wencel said the outpouring of support has been overwhelming.

“It takes a village to raise a child, and this is a perfect example of that,” he said. “Anytime we need something, it seems like someone steps up, comes forward, and knocks on our door. God has given us everything we need.”

Wencel said one of the saddest things in their lives, the death of their daughter, has brought about one of the best things, having their five grandchildren as a part of their daily lives.

“I wouldn’t give these kids up for anything, and we are so blessed to have people that care about us,” he said. “There is a lot of good in this world, and this project here is a testament to that.”

Wencel, who injured his left thumb twice during the second story expansion, breaking the bone while hammering, then re-injuring it several days later while using a power tool, said he “can’t slow down.”

“Raising five kids is the hardest job in the world,” he said. “It’s 24 hours a day, and it’s demanding.”

Debbie Wencel said she was overcome with emotion by the generosity of the volunteers who have helped with the house expansion.

“When we first dreamed about it, that’s all it was – a dream,” she said. “I don’t come outside very often, because I am homeschooling, but when I come outside and see this, I can’t believe it. We are so thankful.”

Wencel said the addition will make their lives so much better by relieving their cramped condition. In addition to the many building volunteers, she said people have helped in other ways, providing child care, raking leaves and even folding laundry.

“We felt all alone at first when we took on this responsibility, but we are not alone,” she said.

Debbie Wencel has been overseeing the online learning for four of their five grandchildren during the pandemic, which has made their close quarters all the more evident.

“It’s just a room, and we are all on top of each other,” she said. “You got the teachers teaching, and them guys confused, not knowing what page to do, and it’s been a challenge, but it’s better to have them be safe.”

She said the volunteers and donors made the house expansion a reality.

“We couldn’t do it without the help,” she said. “This would have always been a dream, and it is reality because of the sacrifices of other people; their time, their money, their donations.

“Times are bad, but people are still reaching deep in their pockets and are willing to help us out on this project.”

Dave Regan of David Regan Exteriors, LLC, of Detroit, who is installing the exterior siding and trim, said he had been wanting to do a project for someone in need when he learned about the Wencel house expansion through social media.

Aaron Wolf, a technical sales manager for JamesHardie Building Products, which donated the fiber cement siding and trim, said they try to help out whenever possible.

“Having the relationships that we do with our install partners and our channel partners brings more of that to light, and we are able to help a lot more, and we are happy to do it,” he said.

Wolf said it was heartwarming to see the progress that was being made at the house, especially given the time of year.

Michael Kratz of JamesHardie said it was good to be a part of bringing holiday cheer to a family.

“We sell building products that go on homes every day, and to actually see it used like this makes you feel good,” he said.

“Once it got on paper, Tom’s a tireless worker, and there were a lot of really good guys who just tried to help out,” he said. “We’re going to call it the Christmas house.”

Kearns said that despite the hard times people are experiencing now, the people who are helping the Wencels show the goodness of humanity.

“I am a spiritual guy, and it moves me in so many ways,” he said. “It gives to deserving people. Tom and his wife are tireless workers, and what they have taken on in raising these children is so much bigger than anything we have done here.”

Other donors are Chris Mans and Ron Bittker of Mans Lumber – Millwork, who donated building materials, and Pat Bailey of Pro Vision Construction of Allen Park, who donated the labor to remove and install all the roofing.

For more information about the Wencel family, the non-profit for Jaime’s Kids, and an updated list of donors, go to jaimes5kids.com.

The logo for Jaime’s Kids, a non-profit, 501(c)(3), was drawn by the Wencel grandchildren.

If you would like to help, the following is needed for completion:

✓ Financial Contributions – by check or PayPal

All proceeds will benefit the children and the housing project. We have started a non-profit, Jaime’s Kids, which is a 501c3 nonprofit organization. If you would like to support us you can contact us by calling or texting, Tom Wencel, at 313-598-5182 / tgwencel@gmail.com or donate to our Paypal account.

Jaime’s Kids is a 501c3 nonprofit organization. All donations are tax-deductible.

Please consider making a one time or recurring donation to Jaime's Kids to help with basic needs and activities.
Make a donation